Gilgamesh famously failed in his bid for immortality, but I’ve always been tempted by the idea, and so this Easter weekend represents a rare chance at actually achieving it thanks to an old legend in the Peak District, England’s oldest National Park.

Once a year, on Easter Eve, legend has it that an ancient Mermaid goes for an annual swim in an obscure salt water lake called ‘The Mermaid’s Pool’. If you see the Mermaid then, depending on which version you believe, you either live a long life, become immortal or get dragged down to your doom.

The story goes that the lake is made of sea water from a great flood, and she was caught here. There are other versions though. One is that she was a young girl, accused of being a witch by a young local lad called Joshua Linnett, and drowned in the pool while swearing vengeance.

She had her revenge though, with Joshua  found dead three days later on the pool, his face torn to shreds.

Another, more romantic story is that a sailor from a nearby town of Thorncliff fell in love with her at sea and brought her back. 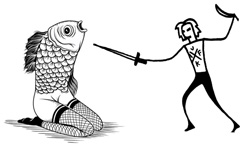 This pool has some other strange quirks. Animals won’t drink here (probably because it’s salt water), it never freezes (again the salt), birds never fly over it and that the water level never goes down. Apparently, once during a moorland fire, the fire service constantly sucked lots of water out, and it still stayed the same level. Locals think it’s a gigantic U bend.

There’s some more weird stuff, about a serial killer, luminous marsh gas and a one armed man. You can read more about it here:

Anyway, this weekend on Easter Eve, myself and maybe Thee Intolerable Kidd, if he can get past the freezing conditions, plan to have a crack at immortality. We’ll be making a film of it, so watch this space.